A passion for vintage cars and boats

Our passion for vintage boats and cars means that we can uniquely offer days out on the river that may also incorporate a short trip in one of our pre-war Rolls Royce collection for a truly vintage day out. Such trips may include collection from a local hotel or railway station, or combine a trip to a winery or country home.

Lollapalooza is a stunning example of a 1930s classic wooden-built day cruiser.

One of only 164 of the 26-foot day cruisers built in this style in 1937-38, she is constructed largely from mahogany on oak, and is a credit to the wooden boat builders craft. She was almost entirely rebuilt between 2008 and 2011.

With inside and outside spaces, and  an all-weather cover Lollapalooza is a comfortable way to cruise the Thames.

Nina has been fully refurbished with mahogany planking and floors. She is now electrically powered and provides a beautiful silent cruise on the water. With comfortable seating, she has an all-weather cover if needed and is ideal for couples wishing to enjoy a romantic trip on the river.

Catering options include morning coffee/tea with pastries and cream tea with champagne an option.

NOTICE
Charles Cooper Henderson was due to be available for guest days out from April 1st 2019, but due to circumstances beyond our control she still requires further works and is not available for hire. We will post updates as we have them.

Charles Cooper Henderson was built in 1933 and has a rich history as an RNLI Lifeboat based at Dungeness, becoming Britain’s longest-serving lifeboat.

During her 41 years in service, she took part in 171 rescues and saved 63 lives but for many her finest moment was during the evacuation of 338,000 Allied troops from the beaches of Dunkirk during World War II. Read Charles Cooper Henderson’s Dunkirk story,  as told by the skipper Bob Hector .

All boats carry first aid and firefighting equipment. Life jackets are available as required. All our boats are certified under the Boat Safety Scheme and are fully insured. 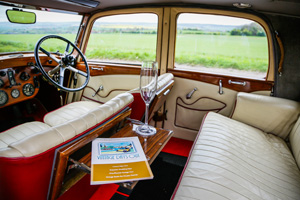 Our magnificent pre-war vintage car collection is reverently restored and lovingly maintained out of the utmost respect for their noble histories. Chauffeur-driven, our vintage cars can be hired as part of a day out experience are also available for weddings and special event hire.

1923 Rolls Royce 20 HP Barker Limousine (above left)
Affectionately known as the ‘Baby’ Rolls, it is judged to “exemplify the best in early 1920s coachbuilding – a great example of the craftsmanship of Barker & Co. a London coachbuilder founded in 1710 — and is believed to be the last surviving example of its type. This car has featured in Agatha Christie’s ‘The Mousetrap’ and the Worzel Gummidge TV shows!

1930 Rolls Royce 20/25 Hooper Sports Saloon (above centre)
First owned by Sir Max Pemberton in 1930, a popular British novelist, clubman and dandy. ‘Hooper’ refers to the coachwork which was supplied by Hooper & Co, who had previously supplied carriages to Queen Victoria for over 60 years.

1933 Rolls Royce 20/25 Windover Limousine (above right)
First supplied to Sir Erik Olof Ohlson, 1st Baronet, a Swedish-born British shipping magnate, coal and timber merchant. Other owners of Windover Limousines of this type were various lords, earls and ladies as well as King George of Greece and his son Prince Paul.

EXPERIENCES & DAYS OUT
This site uses cookies: Find out more.